“This is a story that has been haunting me for the past 24 years,
so I’ve been gradually transposing it onto the canvas driven by an almost therapeutic instinct.”


A giant machine lands on the earth after a cyber-war. During  a deluge, headless people try to save the world with a pre-modern tube.Between the sky and the earth is a wide expanse of green water. Is this Apocalypse or just a science fiction film? It is an apocalyptic scenario in Sándor Szász’s Empire. 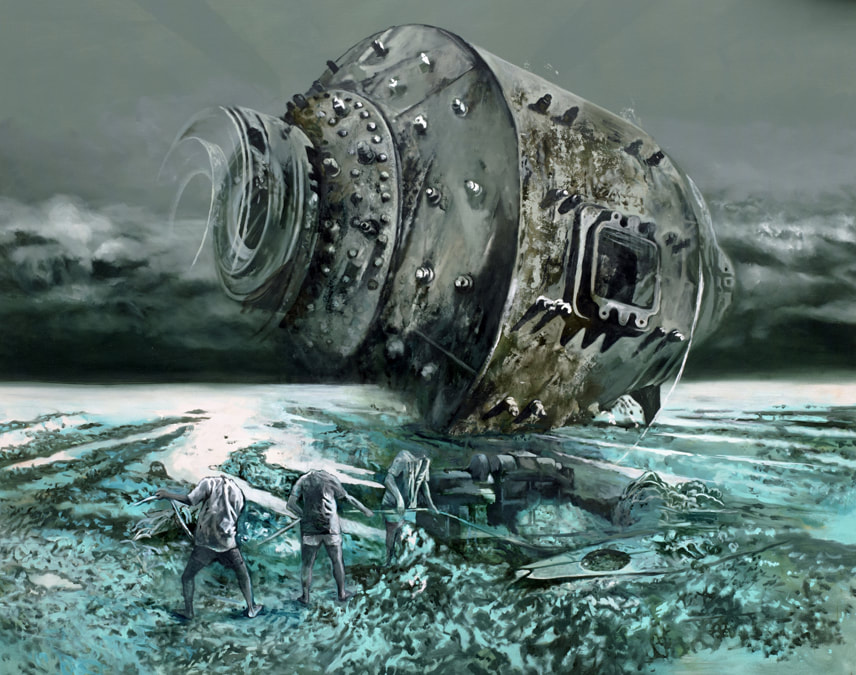 Szász was born in 1976 in a Hungarian family in today's Romanian Transylvania, a place of ethnic diversity that became part of Romania after World War I. Memories of Ceausescu's dictatorship and unbelievable everyday absurdities run through his art in the last 20 years.

Sharing the same birthday with Ceausecu, Szász belonged automatically to the "happy miracle children" who could receive birthday presents from the government. This coincidental privilege never failed to remind him of his identity as a Hungarian minority, a second-class citizen in Romanian communities.

In such a social-political context, Szász lived an incredible and ambivalent life of privilege and inferiority.  Two episodes during that crazy time haunted him all the time.

The first is his sister’s fleeing in 1988. When the system showed neither sign of collapse nor mercy for run-aways, his sister, 18 then, succeeded in her second attempt to flee to Hungary, swim across the Hungarian-Austrian border, climb over the Alps to Germany.  Ending up in America, she promised to get Szász out of Transylvania and bring him to the US. This story, like a Hollywood movie, leaves him wondering all the time why people could be so determined to be done with their own hometown.

The other has something to do with the flood in the neighboring village Bezidu Nou. In 1988, Ceausescu’s government introduced a so-called village systematization program in the name of socialist construction, which turned out to be a violent destruction settlement program leaving the small village almost in ruin. Farmers were forced to the construction site in the cities for industrialization and then returned to the village to build a new dam for an artificial lake. Initially the villagers embraced  the project with enthusiasm and even volunteered to help, but it was too late when they realized what was going on. Troops were called in to complete the job, and the village got submerged, leaving the few survivors to relocate and renounce their identity.

Szász grew up witnessing the country transforming from a totalitarian dictatorship into a democratic system. All the childhood memory of Trasylvania has a deep impact on his life.

Barnes’ definition is predicated on incorporating memory with identity.  Identification with the closest reference persons, later with social groups, is fundamental to the development of personality and self-worth. Self-esteem is determined by the feedback from reference persons and groups.
George Mead distinguishes the two aspects of the ego, namely, a more receptive and reflecting one, the "ME", from an active and impulsive one, the "I". [1]
In the memory, spontaneous reactions are integrated into Me. Thus, “I” and “ME” are in disagreement: “I” reacts to “ME” and “ME” integrates “I”. If they conflict, crisis arises, affecting one’s self-value which depends on positive feedback from the context.

In Szász’s case, the absurd and paradoxical childhood experiences between privilege and inferiority, the Romanian political reality and the Hungarian minority, often triggered crises in his adulthood.

2. The healing power of art

“Water Demons”, drawings of old women, is probably his early reflection on his fellow citizens.

Personal identity is driven by memory. Szász’s memoir focused on the trauma of catastrophe in personal identity. The connection between memory and the self echoes the collective identity memory.

These stories were also present in Szász’s early academic years. Sometimes eager to escape from any identity, he took refuge in paper and canvas. Instinct told him that there were ways to go deeper in painting and get away from the self temporally.

In spite of the past, this young man was curious and open. while in Budapest, Szász could briefly repress his memories because of his interest in music and  painting. Francis Bacon’s works impressed him considerably, together with Andrei Tarkovski, David Lynch’s movies and Bela Bartok’s music. Art, whatever form it took, built him another planet.

In all these years, he experimented widely before finally discovering his passion for oil painting---it might be due to the rise of the New Leipzig School.

In fact, after the progressive ’70 and ’80s, Land Art, Action Art, Concept Art, Performance Art, and even abstract painting came to an end, leaving only the New Wilde represented by Kippenberger, Castelli, Salomé in pictorial art  in Germany and Switzerland in the ’80s.

From the ’90s, figurative realistic painting became hot again. Having enough of the aesthetics of spontaneous, obsessive, abstract, and sensuous qualities, he probably had a longing for realism again, and even romanticism.  However, painting seemed to be thriving: biennials now bulged with both abstract and figurative painting in the last 20 years. Thus, the New Leipzig School came into the spotlight in the art world following Neo Rauch’s success at the American art market.

Szász grew up in the socialistic-realistic Romania and was connected as closely with painting as with realism. In addition, in times, when the discussion about the death of painting was on the wing, he was too young to understand the historical controversies, which may help to explain why he never doubted painting essentials and readily accepted realism.

In 2004, what he acquired at the Academy finally led  to a prestigious Strabag painting award. Undoubtedly the academy gave him technical certainty, but he also noticed that the academism hindered somehow his imagination, so he felt sometimes lost in  art’s historical labyrinth. After all the technical and methodical experiments, he suddenly fell into doubt and self-doubt. Finally, in 2010, his childhood memory, which had perhaps been slumbering in his subconsciousness overcame him. Thus, he decided to break away from academism and succumb to his  inner voice and fantasy.

In art history, classic modern art is about innovation in style and farewell to, and even subversion, of the past. After Communist ideology conquered Eastern Europe, the new power has revolutionized the so-called “old-fashion” and “bourgeois” ideology by introducing socialist realism into art. The state-based new art promoted a “positive” and “healthy” socialist new man against decadent, degenerate art generally.

Never satisfied with his achievement, Szász strives for visual and conceptual renewal as regards pictorial language. His subversion of socialist realism is to relive modernist "decadence" and “absurdity” plus postmodern nonsense and science fiction in art.

2011 marked a new era --- the ruins in his memory became metaphor for catastrophes. In Gazabo and Mill, into which he has incorporated strong surreal elements, became an embodiment of his pre-ruin reflections about childhood.

Origin and the K-141 (2012) are the first formative memory of home, catastrophe, and flood, like the end of a havoc-wrecking war.

Dark green and red are used to contrast those gloomy earlier works. The shining dark colors have astonishingly mitigated the cruelty of the catastrophe and given the works a touch of postmodern lightness and irony.

In the same year, Szász completed another important work: “Time Machine”. It drew on  his  memory in a special way. The catastrophes of the past was  mixed with the future. The time machine, with its own dynamic, and would not follow human will. The past made up the memory and predicted the future.  It is also strikingly different as regards composition: red, white and black reigned but are minimalistically distinct.

“Vortex Chamber” (2013) sings of a pastoral about dreams and bitter awakening in the catastrophes and ruins as coincidence of life.  In the following year, he left the future and went back to the present by connecting his  childhood trauma with the contemporary refugee drama on the coast of Italy in “Curse of Medusa and Symphony of the Orphans”(2014).

“Empire” (2015) is probably the highlight of his aesthetics of the ruins. The giant machine landed somewhere after the cyber-war or terrorist catastrophe. The earth has already been enchanted in the green sea. A few people try to save the world with a pre-modern tube. The disproportionate machines and human beings turned the two-dimensional canvas into a three-dimensional world. It seems quite absurd but idyllic, like a lyric of the ruins.

“Nostalgia for light, Flying Circus”  (2016)  points to the future again. In the populist Europe, some Eastern European countries became increasingly skeptical about the EU. With balls and balloons as symbols for Brussel, Szász hinted at his doubts and possible new catastrophes, without making judgment.

Szász also refers to aliens and science fiction. His original intention is directed at childhood memories and adulthood's illusion about childhood. Ruins, floods, apocalypse are per se not amusing but implicative. In fact, Szász lead people to ridicule human absurdity with science-like characters and machines. The unattractive images of machines from other planets and faceless figures offer him a perspective of human being in this world.

"The Other" is a mirror, as ancient Greek philosophy says. While understanding himself, a human being refers to others, including imaginary aliens. Having experienced Eastern European socialist realism, Szász hopes to reveal the sacredness and uniqueness of the mainstream ideology by showing  "another" observation.

4.  After Identity - an artistic answer to politics

Szasz's paintings are part of Eastern European contemporary art, neither a return to the traditional grand narrative nor petty bourgeoisie’s sentimentality. They emphasize the conflicting personal and social identity ---based on special political history and political, social discourse.

When socialized and politicized to some extent, however,  painting is bound to move towards its own opposite. Therefore, the social theme is based on an individual’s comprehensive social experience of subjective aesthetic expression. Although social, it is undoubtedly personal and subjective. Szász takes care to avoid the contemporary grand narrative, even though he intended to be social and political.

Trying to avoid grand narrative and claim to be objective, he is keen to capture the era that cast him in a general social mood and collective unconsciousness. In fact, he goes through the spiritual social landscape of subjective performance, in-depth analysis of the Eastern Europe that is in the throes historical transformation, the inner struggle and the lonely, inexplicable, cynical world. In addition, it  involves the indiscriminate growth, alienation and nihility of human nature, indifference and desolation of emotion, and confusion and uncertainty of the new membership of the EU. Even so, Szász doesn’t rely on sensation and restrain the emotional expression to even indifference.

Szász’s art of social perception and social psychological authenticity have some symbolic grip on contemporary life. This kind of presentation is between the subjective and the objective, so his art is social, political, lyrical, and poetical. In other words,  it  is on one hand rooted in  the ruins, deserts, floods and machines symbolizing the East European (Romanian and Hungarian) history and  reality, and represent strong poetic character on the other, therefore building a kingdom between the conceptual and the documentary with his unique style.

Sándor Szász was born in 1976 in Târgu Mureș, Romania, an important historical and intellectual center of the Transylvanian region. He attended the High School of Fine Art and Craft in his hometown. Szász continued his academic training at the Hungarian Academy of Fine Arts in Budapest, Hungary, where he specialized in painting, between 1995 and 2001. In 2004 he was the recipient of the Strabag painting price, a Viennese international art award, which also entails his work being incorporated into the prestigious collection of the firm. Since then, a steady development can be examined in his career, which lists numerous art awards, solo and group exhibitions in the domestic and international domain alike.