Juan Xu: Your video Operation Thanatos was an impressive work and has already received a great response from the audience. Our exhibition is about capitalism and art and titled Capital @Art. Even though you actually did a new video work for this exhibition and even submitted extra, I decided to take the older work Operation Thanatos because that's really about “capital.” In Operation Thanatos, you can see all the symbols of capitalism right away: dollar signs, greed, and much more. Personally, I was totally overenthusiastic about the content because it seems like this video was made especially for our exhibition. Is capitalism also a topic of your art making? Could you tell me a little bit about the origins of your work?

Crocodile Power:  2011 was a year of super civic activism in Russia. People began to unite and solve all their problems without the state interfering. For example, groups of volunteers started extinguishing forest fires and restoring justice in the Trans-Ural settlement with guns in their hands and without the participation of the police and authorities, just because they had lost all trust. In Manezhka square, December 2010, 300 meters from the Red Square - thousands of football fans went out to demand the police stop turning a blind eye to Caucasus criminal gangs after one of them had been killed by Caucasian criminals. The air was literally electrified, we were all one pace away from a revolution. Police arbitrariness, conflicts with Caucasians, the absolute inaction of authorities, the crisis of 2008… I do not think that anyone seriously thought about criticism of capitalism, but rather it was a protest against reality. We had all lost the past and found no future. The message of our project was: to become aware of the current situation, to stop living with illusions, to not sit in front of the TV and the Internet, to stop absorbing tons of toxic information, and finally begin to take action.

Sooner this growing animosity between the government and society led to serious restraints on liberty, and as a result, we laid aside all hope of even a feeble semblance of civil society. In Russia 2019, we can't be as free as we were here in 2011.

Juan Xu: I feel that this is somewhat similar to China in 1989. However, after this, the entire Chinese society devoted itself to capitalism. Making money has become the consensus of most people. The voice of public intellectuals has become particularly meager. In the past few years, there was also a microblogging network platform that has now been gradually disappearing. Hanhan, a well-known young man in China, once said that the average Chinese citizen would rather exchange 10 yuan for voting rights. Russia also engages in capitalism, but it seems that the resistance of citizens has never been interrupted. Performance art and performance artists such as Pyotr Pavlensky and Pussy Riot are very shocking and incredibly touching. Your work is about gain and greed, but is this especially about “Capital”? Can we understand the work as criticism of capitalism?

Crocodile Power: Modern capitalism has never appeared to the full extent here in Russia. Few people understand what this is. Capitalism in Russia was more reminiscent of the American version in the 20th century, or in the post-revolutionary years in Russia, when we were held under the motto “rob what was robbed.” Double standards, post-truth, greed, and cynic elite permissiveness - this is what capitalism looks like today.

Russia is a huge mirror of the world, in which, with terrifying accuracy and even exaggeration, one can see all the imperfections of the modern system.
Yes, of course, today the story comes to a moment of crisis to the system. You can feel it all around the world, but it's still unclear how the system will be transformed further. Technologies are developing faster than political processes, which can present a clear vision of the future no more.
Capitalism turned out to be blind to a vast amount of troubles, such as global warming and so on. It is impossible to maintain this model and if nothing changes, we may see its degradation and death.

Therefore, the French writer Frédéric Beigbeder said that China is the "most capitalist" and "most socialist" country in the world at the same time. China used to be a country with “a big pot of rice,” and now the whole nation is fully engaged in business. In China, hospitalization must be paid in cash… History is full of irony! "The most socialist" China envied the "most capitalist" state of the United States' social welfare. China has state capitalism. Russia has oligarchs. What is the social reality in your view?

Crocodile Power: Sometime it seems that the system tends to be feudalistic, sort of the Russian Middle Ages, the times of Ivan the Terrible. Of course, without blood, but we still have that feeling. In fact, folks survive as best they can and each person has their own reality. During our not so long lifetime we can see the changing political and economic vectors of development at least four times, and frankly speaking, we lost all illusions of the possibility of any acceptable reality. Personally, we are in a state of autonomous flight, trying to minimize contact with the state. A noteworthy detail is that the people we meet throughout life are mostly very good. Maybe this is our social reality, a small partially independent island created by ourselves.

Juan Xu: It seems to be similar to China in terms of feudalism, as well. However, many Chinese have blood-related "skirts,” where the children of many senior Communist Party officials are today’s millionaires and even multi-millionaires, right? Is Russian capitalism very different from the Western version of capitalism? To my knowledge, everybody has health insurance in England, but not in Russia. How do you explain that?

Crocodile Power: We do have a compulsory medical insurance. In Russia, everybody must have it. This means anyone can get free medical care anytime and anywhere. The question is how high-quality it will be, whether the necessary medicines will be available, and how qualified the personnel is who will take care of you. But anyway, everyone has insurance. The same with education, everyone has the right to free education - secondary and higher education. Again, there is the issue of quality, but this will be a separate case. That’s why children of Russian elite prefer to get an education abroad and even try to not come back to Russia. It is the same situation with medical care, people with big money choose Western medical care.

Juan Xu: You have used a lot of humor in your work. Mark Twain said, “Everything human is pathetic. The secret source of Humor itself is not joy, but sorrow. There is no humor in heaven.” Russia seems to be far from heaven, so it needs humor. Can art really do something social? What can one do as an artist?

Crocodile Power: Humor in our works is part of our attitude and perception of life and time. It helps us to keep a cool head and protects us from attempts to manipulate us by external forces. The most important thing that an artist can do is to remain an artist in spite of everything. Art always translates something bigger than an artist’s input; different meanings are revealed during an interaction with the viewer. It is a universal language beyond the limits of everything, even time.

For almost its entire history, art has been a verb, something that does things to or for you, that makes things happen. And if art can provoke people going on a rampage at an exhibition, it still works. 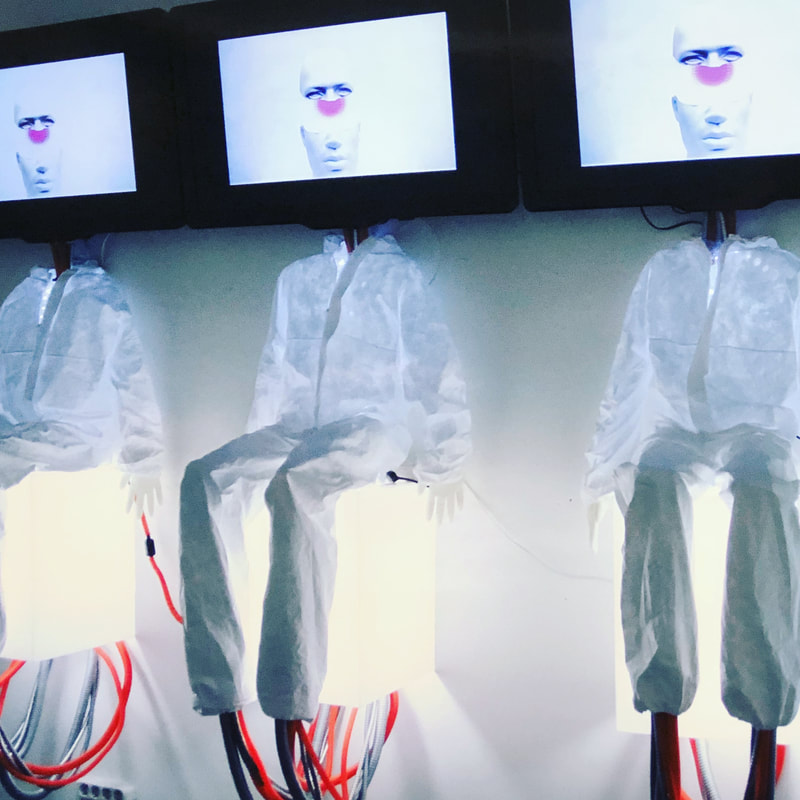